Kurt Brandt, CEO Response time is the most critical aspect of emergency services, including law enforcement, fire suppression, and emergency medical services (EMS). During emergencies, the difference between life and death can come down to a matter of seconds. One among the root causes—probably the predominant one that leads to delayed response time—is the traffic congestion at highway–railway grade crossings. Even though authorities use modern mapping software to reduce the traffic, avoid mishaps, and improve the travel experience, railroad intersections befall into a point of exasperation for emergency responders. Many cities across the U.S. experience these types of problems. This includes metro Chicago, Detroit, Houston, and cities throughout Wisconsin, where LinqThingz, a Predictive Mobility company is located.

Having a longstanding experience in working with different government authorities, Kurt Brandt, an IoT/AI architect and data scientist, was in discussion with cities in Wisconsin on the challenges pertaining to poor traffic management at these intersections. At the time, their railroad crossings were blocked for 20 percent of the time per day. Meaning, first-time responders got caught at these crossings one out five times. This added eight minutes to the response time, which drastically cut the survival rate of patients. Cities in Wisconsin struggled for more than five years to find a solution that could help first responders avoid such delays. But, the best solution they could come up with was to ask the responders to guess the best route to a destination based on pure instinct.

Brandt realized the magnitude of this issue the day his mother had to be taken to the hospital. He says, “They gave me two options—either to take the shorter route where railroad crossings would block the transit or the longer, but more predictable route.” Brandt was shocked to hear this but had to make a choice regardless. Every second during his travel to the hospital, the fear of making a wrong decision haunted him. It was made out of panic and desperation, rather than empirical data.

Brandt noticed—for the first time—that he was not the only one who went through such a situation. There were millions who came across such incidents where they had to make critical decisions based on just instincts. Identifying the lack of robust technologies to mitigate this issue, Brandt decided to come up with a feasible solution to help first responders avoid blocked railroad crossings. This thought eventually gave birth to “the predictive mobility technology” or, as Brandt calls it, “a groundbreaking innovation in managing the railroad congestion.” With deep domain expertise in developing and deploying AI and IoT solutions under the LinqThingz brand name, he was confident about his idea, but something was missing.

From Idea to Implementation

What Brandt knew about the issue was only the tip of the iceberg. En route developing a robust solution, the dedicated team of experts at LinqThingz figured out more complex problems. In their preliminary “fact-finding effort,” they came across a report published by the US Congress in 2006, predicting that trains blocking mercy vehicles would become a significant problem in the future. “As the population grows, the amount of traffic on the road and the number of trains will keep on increasing.

Driven by the mission to save people’s lives, property, and time, we developed a proprietary platform that helps first responders travel with reduced delays

Meanwhile, the number of high road miles remains constant, and so are the railroad tracks,” says Kurt Brandt, CEO of LinqThingz. This leads to an increasing number of vehicles-including emergency vehicles-being blocked at rail crossings.

Team LinqThingz also found several attempts made by the public authorities all across the U.S. to mitigate these issues. From posting signs with complaint instructions at crossings to parking extra vehicles on rented parking spaced on the other side of tracks, these authorities went above and beyond their means to resolve the issues, but to no avail. While building bridges and tunnels could form ideal solutions, they cost tens of millions, take years of approvals, and close crossings for months at a time. These ideas lacked the feasibility factor from a monetary and execution time standpoint. Furthermore, the most sought-after web-mapping platforms, including Google Maps and Apple maps, required a perennial flow of vehicles with devices through railroad intersections to derive data. As these platforms depended on satellite data and social data, they could not provide precision and future insights to predict traffic blocks.

At this point, Brandt had everything he wanted to develop the predictive mobility solution—a well-prepared team, expertise, and a complete understanding of the problem and its causes. “Driven by the mission to save people’s lives, property, and time, we developed a proprietary platform that helps first responders travel with reduced delays,” says Brandt. With unique sensor data coupled with a distributed AI platform, the solution provides precise insights needed for predictive mobility. It predicts future interactions of mobile objects to avoid blocks at railroad crossings.

The Right Blend of Technologies

What makes LinqThingz unique is its potential to pull out complex elements, making the right mix for an end-to-end solution. The hardware side of the solution is based on a patent-filed AI-based IoT sensor technology. “LinqThingz collects unique data with the help of AI-powered sensors that when combined with our prediction engine can provide precise and forward looking insight,” says Brandt. This allows the solution to provide information to people, even in lesser-populated areas. For example, the availability of data from web-mapping platforms will be minimal in a low-populated area. Therefore, an ambulance carrying a patient at 2 a.m. will find it hard to figure out the best route to the hospital with conventional mapping software that derives the data from smart devices.

By using AI-enabled IoT applications,LinqThingz can give better results for users irrespective of thetime and location.

LinqThingz’s trainable sensor technology can differentiate trains from other objects and understand their position, speed, and length even under harsh environments like snow, rain, and dust by using a heterogeneous sensor array coupled with AI. The company uses predictive algorithms when it comes to interpreting the sensor data. It then feeds information into its cloud of microservices to deliver real-time results. LinqThingz uses location-based services to identify the position, speed, and direction of vehicles en-route. Its distributed AI, powered by a cloud-based infrastructure, determines railroad crossings expected to be closed and identifies alternate routes. The company communicates this information with users through real-time notifications that allow them to avoid intersections that are going to be blocked.

LinqThingz’s solution helps first responders to see the footprint of all intersections and head toward the hospital without any delays—thanks to the solution’s ability to predict when and where the railroad crossings would open or close.

The impact of blocks at railroad crossings are not only limited to the emergency responders. Verticals, including logistics, supply chain, and even commuting, are also affected by poor traffic management. According to reports, it costs logistics companies 13 billion dollars a year in delays caused by blocked rail crossings. On top of the financial impacts, longer wait time at railroad crossings results in higher fuel wastage, which increases the carbon footprint. Adding to the woes, people spend 150,000,000 hours a year waiting at rail crossings, adding 30 percent more time to their commute time when rail crossings are on their path. The University of the West of England published a report showing that adding 20 minutes to your commute makes you as miserable as getting a 19 percent pay cut.

LinqThingz extends its hands to accommodate these areas into its result-driven solution with predictive mobility capability. With LinqThingz’ platform, logistics companies can decrease the delay time and save billions of dollars in fuel, maintenance, driver, and other associated operational costs. Also, citizens can use LinqThingz’s platform to reach their destinations on time, eliminating unplanned delays. Furthermore, the solution serves as a reliable tool in the construction environments as it can be used to synchronize the transportation of materials to the location without any waiting at the intersections.

With such a novel, result-driven solution, LinqThingz plans to join hands with the public authorities across the U.S., aiding their initiatives for making their cities smart. The company is emerging as an all-inclusive solution provider for traffic management efforts with its platform, empowered by technologies including IoT and AI. In a nutshell, LinqThingz “makes life safer and easier through the use of next-generation technology solutions,” and the applications for predictive mobility are just beginning. 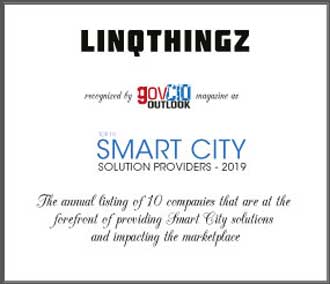 Description
Using next generation technology solutions, LinqThingz create solutions solutions that detects a blocked railroad to avoid traffic congestion. The company is continually learning to increase productivity, reduce costs and improve quality and safety in industry. LinqThingz processes information from sensors and data streams using robust connectivity devices and learns about how processes are being performed. LinqThingz has a trainable sensor technology that uses a heterogeneous sensor array coupled with Artificial Intelligence (AI) to differentiate trains from other objects and understand their position, speed, and length